During the early years of the club, the emphasis on cross-country meant that a summer base was not needed. The Beaumont Harriers did not take much part in the summer season as the programme in 1890 shows:-

The club's first recorded track competition was in July 1888 when the club Captain Deeley won a one mile handicap race at the Prince of Wales ground, Bow. It was a further year before a full programme of athletic and cycling events was held by the Beaumont Harriers. On a cold and windy day in September 1889 club members competed in four track races - 120 yards ,220 yards and half mile, and one mile handicap - held on the rain sodden grass track at the Essex County ground, Leyton.

The brilliance of the Essex Beagles was not only measured on the country for in breaking with the Harrier tradition the Forest Gate club tackled the track events in a big way. They immediately captured the special prize for sending the most entries to the Finchley Harriers sports in August 1891, and they showed up well in other meetings during the rest of that summer-. During the 1890's and the early 1900's a variety of venue-s played host to summer meetings which the Beagles held locally, first at Romford and Ilford, and later at the Memorial Grounds, Canning Town. When the club reformed after the First War the track base became the three-laps-to-a-mile track owned by the Great Eastern Railway at Warton Road, Stratford. This was unavailable after 1928 and the track in Victoria Park became the venue for summer meetings, many of which were held in conjunction with the Manor Park Ladies or, as they later became the Essex Ladies A.C. During 1934 and 1935 meetings were held both at Victoria Park and at the Old Dagenham Park track before the Beagles settled at the latter home.

However, the Dagenham venue was never a perfect choice. Not only did Beagles have to share with the Dagenham Football Club but also the facilities were poor. The minute books and press reports for the late 1940's record the committee's efforts to encourage the Dagenham Council to improve the arena. It is not surprising that when in 1951 neighbouring Barking Council invited the club to make their home at the newly-built Mayesbrook Park track they had little hesitation in accepting.

A top-class meeting was arranged to celebrate the official track opening on 1 September 1951. Despite the continued rain which drove away the spectators, soaked-the athletes to the skin and made the track slippery, an Essex Ladies team - including- Jean Desforges, now Ron Pickering's wife - just failed to break the world's best time for the 4 x 220 yards relay. Another feature of the meeting was the revival of the "Flying Squadron Relay" originally run in 1895. This time, on their own track, the Beagles won against the same clubs which participated in the inaugural event.

The Mayesbrook Park track, under the care of groundsman Jim Patient, was undoubtedly one of the premier tracks in the south during the fifties. The Council promised to improve facilities when money was available but nothing positive happened. As early as 1956 an application from the club for floodlighting to be installed to enable winter training came to nothing and it was over 15 years before the Council installed some primitive lighting on the home straight only.

By the 1970's the track had deteriorated badly through poor maintenance and was frequently out of use for long periods bringing the club into conflict with the Council over a rebate on the annual rental. The upgrading of the jumping strips in 1973 did little to help, poor materials and poor workmanship contributing to produce all-weather run-ups of dubious quality. The club's progress into the British League brought home the extent to which the Mayesbrook facilities fell short of the necessary standard: the mushroom growth in the number of all-weathertracks in and around London only made the Beagles look very much the poor relation.

It was clear that the end of the road had come. The virtual breakdown in communications between Barking Council and Essex Beagles ensured that, whatever the merits of the club's claim, there was little chance that the facilities would be {P9raded to provide the all-weather surface that a club of the standing of the Beagles
4eq9rved, and indeed needed if they were ever to host a British League fixture agai.t. Following preliminary discussions throughout the summer and autumn of 1982, the Committee finally decided in November that year to finalise talks leading to a merger with the ailing Newham A.C. and a move to the Terence McMillan Stadium in Maybury Road, Plaistow.

The Newham club, founded in 1966, had developed a strong squad by the early seventies mainly through their excellent coaching arrangements. Two products of this breeding ground were high jumper David Livesey, who was UK junior record holder with his 2.05; straddle clearance in-1970, a height which he bettered the next year, and pole vaulter Stuart Tufton who achieved a height of 4.90m in 1972. Best of ail was talented walker Phil Embleton who set a Commonwealth 10,000m track best with his time of 41m 36 secs at the Newham track in April 1971. His untimely death from leukaemia three years later was a tragic loss to race walking. Renowned also for their innovative all-star track meetings sponsored by Golden Wonder, the Newham club had hit on troubled times by the 1980's.

At an historic and- emotional special meeting at the Essex Beagles headquarters, Chigwell Row on the morning of 30 January 1983, attended by thirty members, the overwhelming decision was taken to accept the invitation of Newham Council to move to the McMillan Stadium and amalgamate with Newham A.C. to form Newham and Essex Beagles A.C. retaining the black and gold Essex Beagles' colours. Although progress towards a new all-weather track may have seemed slow to club and committee members, the years of hard work and persistence eventually paid off on 7 January 1985, when work started on the complete redesign of the arena to make way for the superb 8 lane, dual straight floodlit track generously funded by the London Borough of Newham and the Greater London Council at a total cost of over half a million pounds. 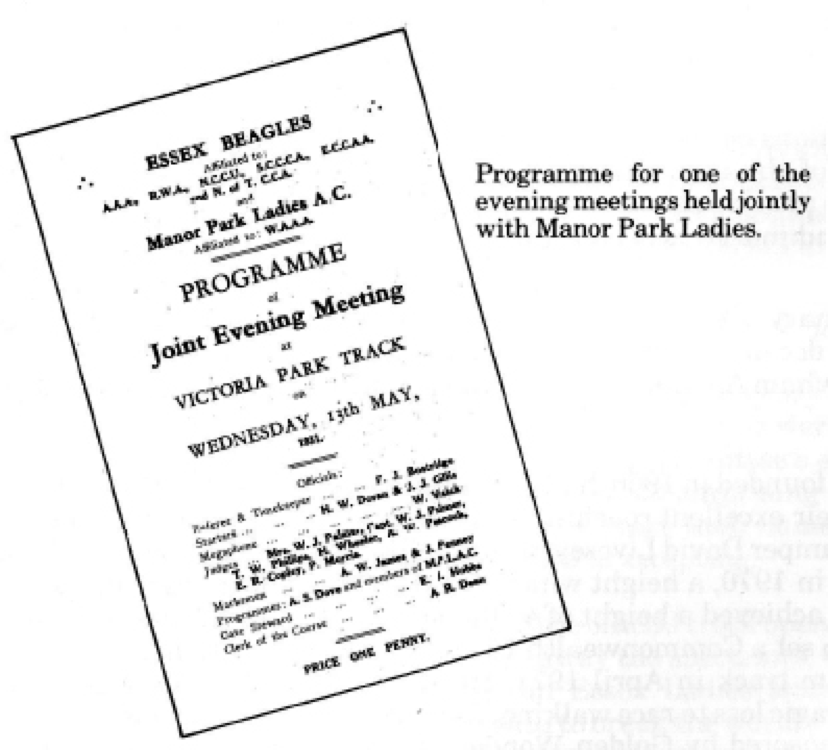 The dreams came true on Friday 26 July 1985 when the club hosted a top-class evening meeting to mark the formal opening of the track, which had taken just over six months from start to finish. A galaxy of internationals, led by the club's own Daley Thompson, provided a sparkling opening for the new facility which was attended by several thousand spectators and guests. There was a thrilling finale to the evening when the Beagles' squad of Tony Warwick, Eugene Gilkes, Daley Thompson and the American Marty Krulee came close to the British best time for the 4 x 200m relay, an echo of that opening meeting at Mayesbrook Park 34 years earlier when an Essex Ladies squad had similarly failed in their record bid. Thanks to the hard work of organiser Bob Mortimer, the meeting was a great success and a credit to the club. Similarly, the British League Division One fixture hosted by the Beagles in August 1986 ran so successfully that the club have been awarded another League fixture for this Centenary year.
Posted by redhatphoto at 05:30