The eighties and beyond...

It is difficult to do justice to the eighties which has seen the club sustain their place in the top six of the 'club of the year' rankings, based upon the top performances by individual members, even though during that time they have had brief spells in Division Two of the British League. Never before have the Beagles had such a strong and cosmopolitan squad which contains a galaxy of internationals. The club has made useful inroads into the Welsh team. Most successful is javelin thrower Colin MacKenzie a UK junior international who became the first Beagle to beat the magic 80m barrier with his 81.30m effort in 1985; MacKenzie wore the red vest of Wales in the 1986 Commonwealth Final. Other regulars in the Welsh team are sprinter Malcolm Owen, hurdler Nick Dakin and recent signing hammer-thrower Nigel Winchcombe.

The Beagles Scottish exile contingent is even stronger. First to join in recent years was triple jumper John Brierley who came in 1978 and has recorded a best of 15.16m, gaining Scottish representation. Most successful of the Scots is hurdler John Wallace whose wind assisted timing of 14.23 secs just failed to gain him a place in the 1986 Commonwealth Games 110m hurdles final. Perhaps the most talented of the recruits from north of the border is Alistair Currie, whose first performance in a Beagles vest produced a third placing in the 1987 AAA indoor 1500m championship.

But the best known Beagles stars to have brought recent distinction to the club have been wearing either the red rose of England or the red, white and blue of the British team. What more can be said of world number one, the supreme competitor, Daley Thompson. A superb clubman, he turns out for the club, come rain come shine, whenever he is available - just as he has since 1974. His fellow decathlete Eugene Gilkes is the ultimate sportsman - a fact acknowledged by the Commonwealth Games sponsors Guinness, after Gilkes' sporting acceptance of his unfortunate disqualification in that competition. The giant Malta-born 25 year-old ranks second only to Thompson in the club (and U.K.!) all-time decathlon list with his 7889 points score in 1986, and looks set to achieve the 8000 points plus target soon - a remarkable performance for an athlete whose career was nearly ruined by major injury.

Another British international, Richard Slaney, has produced the furthest ever discus throw by a U.K. athlete but has failed to reproduce his best form in major competitions. Now that Slaney has settled in America, the mantle of number one discus representative in the club falls on junior international Colin Bastien whose efforts in 1985 place him on a par with Slaney in the U.K. all-time junior list, and promise much for the future. The hammer throwing Forest Gate postman PauI Head is also a great talent. His 67.48 throw in 1984 was the furthest ever by a British junior using the senior weight and he has gone on to break the 70m mark, gaining international success.

The names of Colin Reitz and Graeme FeIl are naturally linked together in the history of the club and it would be invidious to compare these two world class athletes. Reitz is a natural talent whose British record of 8m 12.11 secs for the 3000m steeplechase set in Brussels was the second fastest in the world in 1986; he still holds the UK junior 2000m steeplechase best with his time of lrn29.5I secs achieved when placing second in the 1979 European Junior championships. Gifted with excellent flat speed, as his clockings from 800m to 3000m show, his best senior competitive placing was his bronze medal in the 1983 World Championships.

His older colleague, the Nottingham University graduate, Fell has achieved greater competitive success through his intelligent approach to training and competition. His most notable win came in the 1986 Commonwealth Games when he carried off the steeplechase gold wearing the colours of his adopted Canada, and his best times are very close to those achieved by Reitz. A Beagles member since 1971, Fell understandably turned his back on the British scene in 1984 when the selectors snubbed him for Olympic selection, despite the fact that he was then British record holder. While those Los Angeles Games were in progress Fell showed his support for the club by turning out in a Southern League Division Two fixture at Newham, winning the'B'400m hurdles event. Most recently Fell, who has made Canada his home, turned out in the 1986 GRE Cup Final where he ran away with the 5000m event. It is a superb credit to the club and in particular to coach Dave Green that Britain's fastest ever steeplechase pair are both home grown.

But the success of the club in the eighties cannot only be measured by the achievements of the big names. Their British League team colleagues provide solid support and they in turn are backed up by one of the best 'B' teams in the country which competes successfully in the top division of the Southern League, where they placed fifth in the 25 team league in 1985 - higher than any other British League 'B' squad. Formed in 1975 to provide competition for those athletes unable to hold down a regular first team place, and those returning from injury, the squad also provides the ideal springboard from which the younger athletes can launch their attack on senior competition. Since taking over the team in 1980 team manager Tony Benton has successfully steered them up from Division Four of the league to the highest level possible for a'B'squad - Southern League Division One. The continued grorvth in the Beagles ranks led to the setting up of a third senior mens squad - the 'C' team - in 1986 and in their first season in the Southern League they gained promotion to Division Six, with every hope of a continued upwards climb.

Another healthy development in the history of the club was the formation of a ladies section in 1967. Under the management of Dot Ferguson and later Pat Patten the team gained some successes in the early 1970's, including an English Schools junior ladies 100m placing for Theresa Wright in 1974 and a county 1500m championship win for the diminutive Beverly Keep. Other Beagles ladies to reach the national rankings have been shot putter Kay Styles, high jumper pentathlete Toni Hunt and the most talented of the bunch - Kim Lisbon, who in the colours of local rivals Ilford later achieved the second best javelin throw ever by a British intermediate. Discus thrower Wendy Townsend, herself an English Schools Finalist, is the only current member of the ladies team to rank nationally. 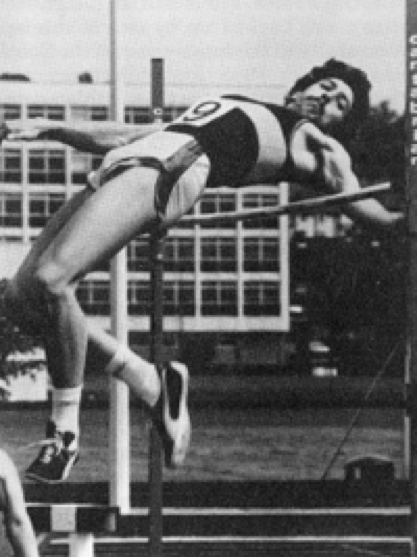 The ladies section was particularly badly hit by the transfer to Plaistow in 1983, for many of the team remained behind to form Barking and Dagenham A.C. But hard work from Cyril and Lynne Townsend, and from Bob Bicheno, has helped to build up the section which now stands at over eighty strong and is starting to achieve some encouraging results.

Although the Beagles are favoured by an able committee too much of the load continues to fall on too few shoulders, for compared to their major rivals the Beagles efforts hang together from a fragile administrative and financial base. Even in this Centenary year our President Stan Robins, who has given so much to the club during his 38 years of membership, continues to carry the demanding role of Honorary Secretary with great skill and efficiency. Our Chairman, Dave Green, who has held almost every committee position during his 40 years with the club, also doubles up as Hon. Treasurer and for good measure is this year President of the Essex County Association. Bob Mortimer has recently withdrawn from the Committee to concentrate on his successful twenty-five strong coaching group - too large by any standards, particularly as it includes many talented individuals. British League team manager Tony Shiret continues to work hard to strengthen his squad, as shown by the most recent signings such as top UK shot star Billy Cole, but increasingly other club duties erode the time he can spend on his foremost task of keeping the club in Britain’s top flight. Extra pairs of hands, however inexperienced, are desperately needed to relieve the pressure on the willing few.

But it would be wrong to conclude this brief study on a pessimistic note. As a fitting opening to this Centenary Year a club cross country squad has emerged as national junior champions for the third time with an excellent victory at Luton - scene of the last success in 1979 - with superb efforts by Julian Gentry (11th), Matthew Yates (57th), Gary Floate (60th) and Scott Debenham (102nd). To add to the success Julian Gentry, in his first year in the age group, ran in the England junior team in the International Cross-Country championships.

The Centenary year is inevitably a time for reflection on the past successes and tribulations, but it is also a time to look to the future. The senior mens squad rank fourth among UK clubs and look forward to continued competition in Division One, British League. Equally the supporting mens squads and the ladies section are well equipped for the future. There is little doubt that the words of John Deeley, the first club secretary, are as true in 1987 as they were one hundred years before "for a fine spirit exists amongst our fellows, and they are not going to let themselves be beaten by outsiders".
Posted by redhatphoto at 05:10