The heel and toe brigade (by Colin Young)

Beagles walkers made a mark in the county two miles race before the First World War with three title wins each for Ernie Douer (1897-8), T O'Gorman (1904-5) and A Pooley (1907-9). But the modern history of walking in the club dates to the revival of the section in 1926 , formally marked by the affiliation to the Race Wathing Association in October of that year.

Sadly the flame that was lit so many years ago and burned so brightly for so long has these days almost flickered and died. For the past fifteen years or so Colin Young has proudly carried the club's torch virtually alone in race walks throughout Britain and in far flung parts of Europe, still competing in European and World veterans' championships.

Adviser to many walk champions, including Paul Nihitt and, Roger Mills, Colin is well-known for his articles on race walking and long distance running which have appeared in magazines over the past twenty years. He still writes regularly for Athletics Weekly. And has kindly brought the history of race walking in the club down to the present day with the following account

Dan Gum was the first Beagles walker to place in major open races and be ranked amonqst the best nationally. The revival of walking in the club owed much to his efforts. Though he suffering severely from asthma throughout his career Dan, a Beckton gas worker, was a redoubtable rival to the very best, including Britain's two Olympic 5000m champions, Tolamy Green and Harold Whitlock. His finest victory came in the London to Brighton and back race. Leaving work at Beckton he travelled by tram to the
start at Croydon, won the race, went home the same way and then on to work, leaving his team-mate Harry Callow to collect the large trophy for him and carry it home in a sack!

Dan's fellow Beckton colleague Stan Abel showed fine promise as a distance walker before World War Two and was a possible for the ill-fated 1940 Olympics scheduled for Tokyo. Losing his finest years to the war period Stan came back to finish second in the 1947 London to Brighton and back. The remarkable Phil Everard was at the helm of Beagles walking section for over thirty years. Though hampered by having the use of only one kidney Phil performed with distinction from 2 miles to 24 hours. Always prominent in county events, in his later years through sheer determination he placed fifth in the National 50km and covered nearly 120 miles in a track 24 hours event. By his dedicated attitude to racing, his cajoling, coaching and encouragement, he produced men who figured prominently in National Championships and classic open events. In his retirement years Phil moved to the Basildon area where he continued to produce fine performers, including the two champions Olly Caviglioli and Olly Flynn. Along with John Hedgethorne he was responsible for starting the Essex Walking League in 1966.

Amongst Everard's charges was Jim Culver, a prominent distance runner who turned to walking after injury and performed with distinction in long distance walking events, placing a magnificent second in both the National 1953 50km and the 'Brighton', along with four successive wins in the Essex long distance race.

Also from the Everard stable were the brothers Leveridge. Bill Leveridge, four times county 2 miles champion between 1947 and 1952, was the short distance expert whilst elder brother Arthur had a longer career and was more consistent. He was for many years a feared competitor in longer races, including the popular Colchester to Ipswich and the London to Brighton, where his best result was second in 1949. Other Everard protégés were Alan Street, an outstanding junior in the late 1949's, John Webb and Colin Young - more of whom more later.

Beagles chalked up an impressive record in the 33 mile Essex long distance walk with no less than 26 team wins out of 30 contests held between L931 and 1970, as well as providing the individual champion on 21 occasions. The cup now presented for this event - the Dover cup - had been won outright by Ernie Dover in 1898 for his three successive victories in the county 2 mile race. Bequethed to the Beagles on Dover's death in 1961, the club presented the cup to the County, who fittingly dedicated it to this walking event where the Beagles had such a fine record.

In the younger age groups the club provided the first R.W.A. Youths champion, when in 1961 Ian Taylor captured the title, to be followed four years later by John Smith, also winner of the AAA Junior mile track championship. The club also gained a win and a third place in the R.W.A. Youths event during this period. International Bob Dobson and Steve Gower spent their apprenticeship at the Beagles under Colin Young before moving on. Dobson, one of the all-time British long distance race walking greats, is today one of the worlds fastest veterans. Another Young disciple was Brian Laver who became a Junior international.

During the early sixties Ron Selmes and Mike Desmond combined with Colin Young and American, Rudy Haluza, already an Olympian and later to finish a brilliant fourth in the Mexico Olympics 20km, who joined the club while serving in the U.S.A.F. over here. This combination gave the Beagles several team placings in short distance events.

Though their racing days were cut short both Harry Callow and Albert Hart have given sterling service as officials. Harry Callow joined the club in L927 and got involved with race walking through the influence of Dan Gum and Fred Fullalove. Club walking secretary for several years, Harry moved to the West Country in the 1940's setting up Trowbridge AC in 1947, and later retired to Weymouth. He is literally "Mr. Race Walking" in those parts and despite his advancing years is an active administrator, with this race - the Chippenham to Calne - a classic on the calendar. Albert, a club member since 1934, has been a sterling worker over the years and is still a much respected, hard working R.W.A. judge.

To end with the most enduring of Phil Everard's pupils, a man who had his first race on 31 July 1948 in the club 2 miles championship (finishing last over 2 laps down!) - Colin Young, who has dedicated nearly 40 years to the sport and now alone regularly carries the club name in race walks. An R.W.A. Junior champion in 1953, he won the Essex long distance title nine times in succession (1958-1966), won the Isle of Man T.T. walk three times in a row, and was second to the great Don Thompson on several occasions in the Hastings to Brighton and the London to Brighton. However, he is probably best known for setting a world's best twice in the Rouen 24 hours (an event he won on four occasions), for winning the classic Lugano 1000km, and for being the only Briton to finish the world's longest annual footrace, the Paris to Strasbourg. Colin finished the 325 mile trek three times, with a best placing of third in the 1971 event, taking just under 3 days for the grueling race. 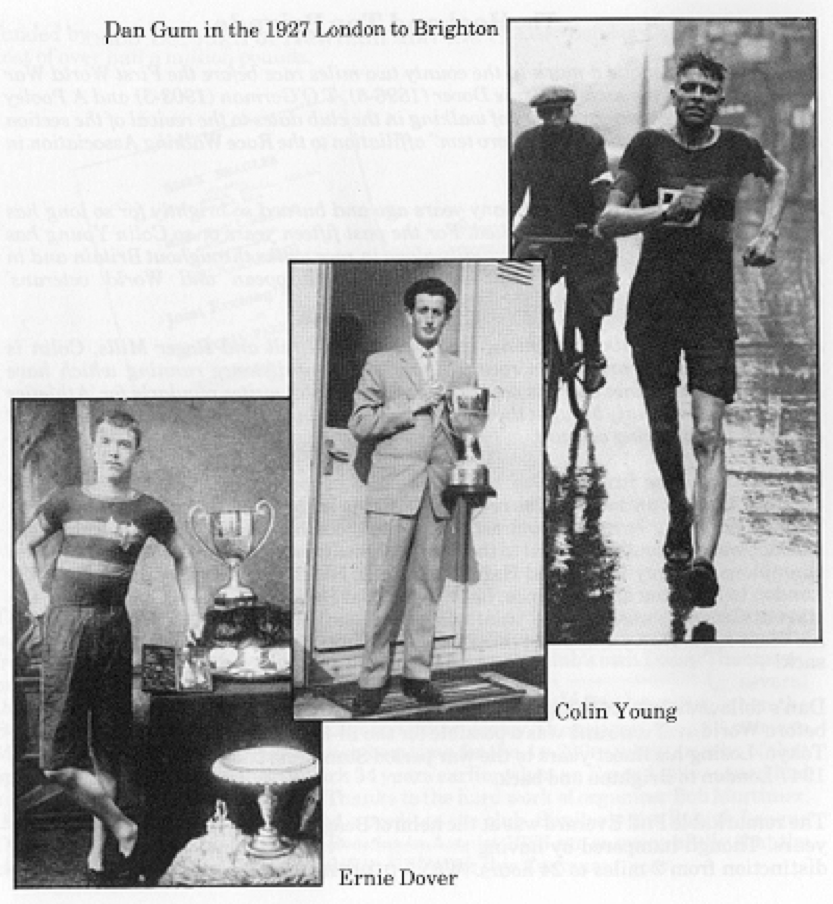 Except for Young's individual efforts, it is sad to report that the section has now largely fallen by the wayside although Syd Webb made a valiant effort a few years ago to revive it. But the sport is so tough and demanding that it takes just as much mental as physical character in today's sporting climate. The jogging boom has done the sport no favours, but walking as a means of fitness may return, as is happening in the USA, and in time the section may be resurrected with members a-plenty to put the club back among the best in the country at the heel and toe’s sport.
Posted by redhatphoto at 05:27